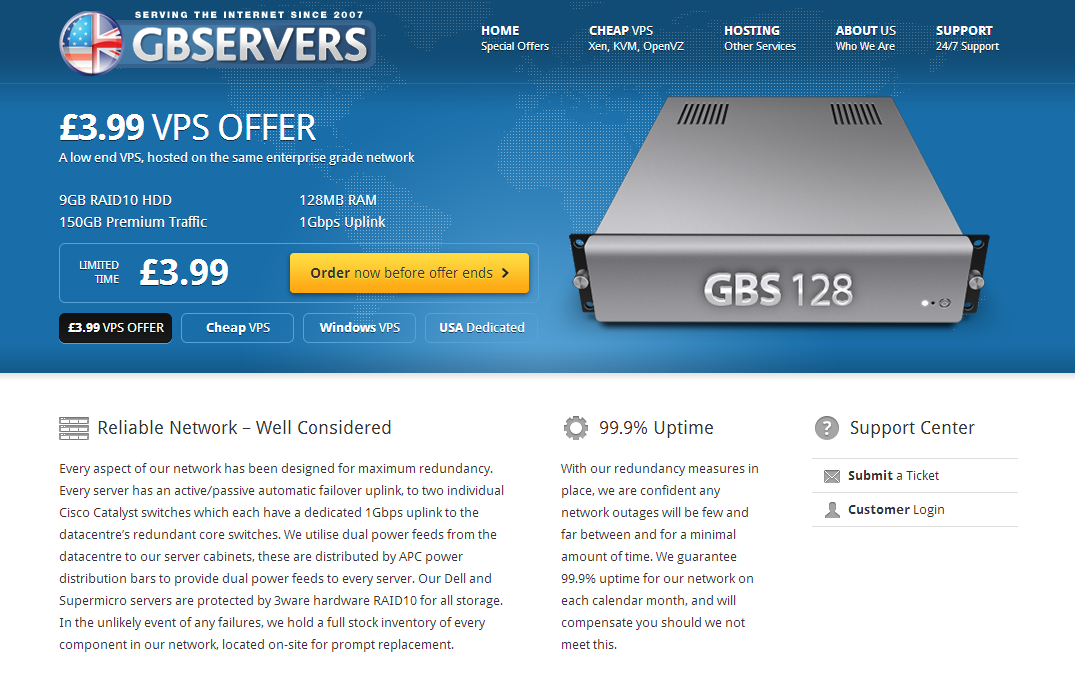 XENPV-384UKLEB 384MB RAM 384MB SWAP 4 vCPU Cores 27GB RAID10 Storage 500GB Bandwidth 1 IPv4 Address 1 Gbit uplink SolusVM/Xen-PV £4.13/Month | Order Link Northamptonshire based GBServers Limited were first featured quite early on at LowEndBox in September 2010 and have since appeared 8 times. Taking a look at the previous offers they seem to be focusing on smaller VPS’s. Servers are instantly provisioned with SolusVM access and are located in their Maidenhead PoP, however not via Rapidswitch as many other hosts are but rather Namesco (Simply Transit / PoundHost). All of their servers are enterprise grade Supermicro’s however they are using Xen’s scheduling systems assigning different priority’s for lower end VPS compared with higher end VPS’s and clients. Payments are taken via PayPal, Google Checkout or Credit/Debit Card via Nochex. UK VAT does not seem to be charged at the moment, they also operate a 14 day money back guarantee. Illegal content, child porn, ‘racist content’, proxy servers and, bots and ‘IRC services’ are among the list of prohibited hosted material/services. They have a decently set out and clear TOShere with a fair SLA too consisting of a 99.9% uptime guarantee. There aren’t many reviews but their services seem to be solid from the reviews I have seen. Do leave a review below if you have any experiences with them! Network Information: Servers are located at the Bluesquare Datacentre in Maidenhead, Berkshire, UK. Test IPv4: 185.10.200.20 Test File: http://94.76.235.198/test.100M