I’ll show you a very simple demonstration of Nginx’s Limit Request module and how it may be helpful to you in keeping your website up if you are hit by excessive connections or HTTP based denial-of-service attacks.

For this test I’m using a copy of my site’s about page saved as about.html, and the Blitz.io service (which is free at the moment) to test the limit_req directive.

First I test the page with the following command in Blitz, which will essentially ramp the number of concurrent connections from 1 to 1,075 over a period of 1 minute. The timeout has been set to 2 minutes, and the region set to California. I also set it to consider any response code other than 200 to be an error, otherwise even a 503 response will be considered a hit. 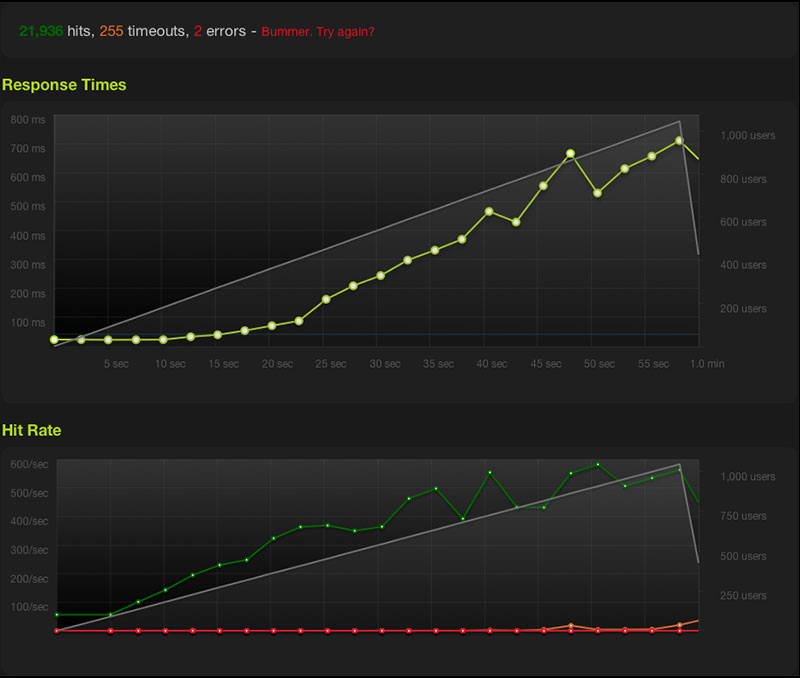 Not bad right? But what if that were a php document. That many users frequently might cause your server to show 502/504 errors as the php processes behind it keep crashing or timing out. This is especially true if you’re using a VPS or an inexpensive dedicated server without any additional protection. (Though if you use either, iptables or pf might be a good resource to look into)

You can of course use caching and other tools to help improve your website, such as using a wordpress caching plugin, which you should be using anyways. But sometimes that one lone person might decide to hit one of your php scripts directly. For those type of people we can use the limit request module.

Let’s create a zone in our http { } block in Nginx, we’ll call it blitz and set a rate of 5 request per second, and the zone to hold up to 10MB of data. I’ve used the $binary_remote_addr as the session variable since you can pack a lot more of those into 10MB of space than the human readible $remote_addr.

Then inside my server block I set a limit_req for the file I was testing above:

So I reload Nginx’s configuration and I give Blitz another try: 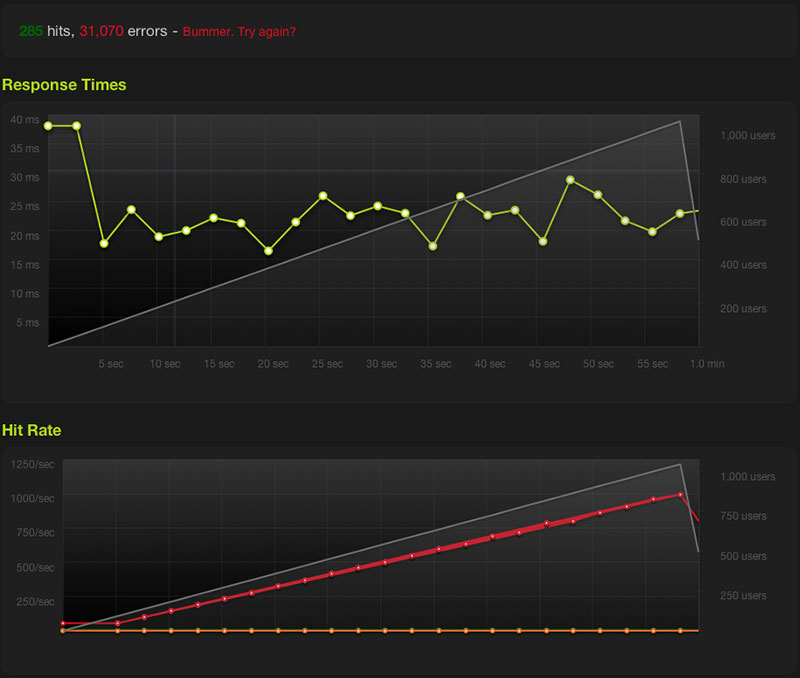 You’ll notice that now only about 285 hits made it to the server, thats roughly 4.75 requests per second, just shy of the 5r/sec we set for the limit. The rest of the requests were hit with a 503 error. If you check out the access log for this you’ll see that a majority of the requests will be the 503 response with the spurts of 200 responses mixed in there.

Using this can be quite helpful if you want to limit the request to certain weak locations on your website. It can also be applied to all php requests.

If you would like to limit all access to PHP requests you can do so by inserting the limit_req directive into your php block like so:

It may help to play with some settings like increasing or decreasing the rate, as well as using the burst or nodelay options. Those configuration options are detailed here: HttpLimitReqModule.

You may have noticed from the graphs above that the test were performed for up to 1,075 users. That is a bit misleading. All of the hits from the California region came from a single IP (50.18.0.223).

This is hardly realistic compared to an actual rush of traffic, or a DDOS (Distributed Denial of Service) attack. This of course also explains why the hits are consistent with the limiting of a single user as opposed to a higher number that reflecting a higher number of actual users or IP sources. Load Impact actually uses separate IPs for their testing regions. However with the free version you are limited to a max of 50 users and number of times you may perform the test. You would have to spend about $49/day to perform a test consisting up to 1,000 users to your site.

Testing from a single IP can be easily done from your own server or personal computer if you got enough ram and bandwidth. Such tools to do this from your own machine include: siege, ab, openload and so forth. You just don’t get all the pretty graphs or various locations to test from.

Also if you were testing this yourself, you have to remember to use the –status flag as Blitz will consider 5xx responses as a successful hit.

I won’t go into too much details, but if you are serious about protecting your site from the likes of an actual DDOS or multi-service attack it would be best to look into other tools such as iptables (linux), pf (packet filter for BSD) on the software side, or a hardware firewall if your host provides one. The limit request module above will only work for floods against your site over the HTTP protocol, it will not protect you from ping floods or various other exploits. For those it helps to turn off any unnecessary services and to avoid any services listening on a public port that you do not need.

For example on my server, the only public ports being listened on are HTTP/HTTPS and SSH. Services such as MySQL should be bound to a local connection. It may also help to use alternate ports for common services such as SSH, but keep in mind it doesn’t take much for a port sniffer to find (thats where iptables/pf come in handy).